Broadcasters bring information, excitement and Latin spice to the airwaves on game day

(This story by Caroline Collier originally appeared in the Summer 2018 issue of TCU Magazine.)

Miguel Cruz was among the thousands of people sitting in the Rose Bowl, stunned by TCU’s 2011 triumph over Wisconsin. But he and Elvis Gallegos ’07 had extra reason to underline that New Year’s Day in the history books. The game concluded their first season broadcasting Horned Frog football games in Spanish. 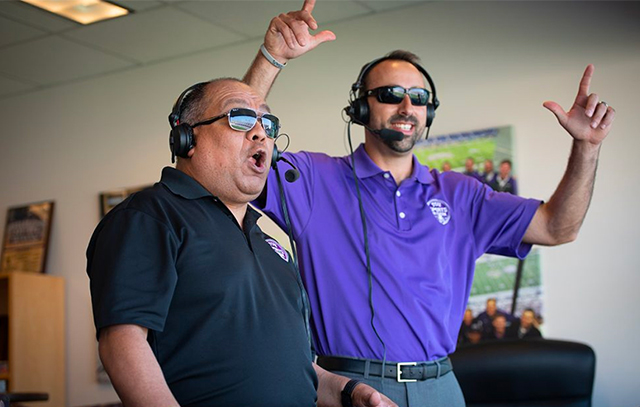 Before 2010, college sports programs in North Texas did not offer games in Spanish. That meant the 1,324,152 hispanohablantes living in the region in 2010, according to the U.S. census, had no way to share in the excitement in their primary language. They represented a massive untapped market, said Brian Estridge, director of broadcasting for athletics.

Estridge hired Cruz, a veteran broadcaster who was doing a Spanish-language sports television show and radio reporting for local professional teams, to do play-by-play for TCU. Estridge tapped native Spanish speaker Gallegos, who played safety for Coach Gary Patterson’s teams in the mid-aughts, to provide insight as the color commentator.

Gallegos said he knew firsthand about the potential of appealing to Spanish-speaking audiences. His parents, born in Chihuahua, Mexico, taught him that most Latino families are sports-crazy. Many families like his, Gallegos said, were in the process of bridging languages, cultures and generations. Why not make TCU Football a nexus? “It was a no-brainer.”

Before the 2010 season, Mexico-born Cruz used his media influence to inform Fort Worth-area Spanish speakers that they could finally get hip to college football, thanks to the radio program debuting on media giant Univision’s 1270 AM station.

He said audiences jumped aboard and soon started to refer to the Horned Frogs as “we” as they filled Twitter feeds with opinions about the college version of fútbol Americano.

The inaugural season taught Cruz and Gallegos to be adaptable. They called a September home game from the outdoor photo pit in triple-digit heat.

When ESPN’s College GameDay set up shop in Salt Lake City in November, a crowded press box forced the Spanish crew into the stands, where they broadcast the big win in the middle of a sea of dejected Utes fans.

It was also a learning experience in how to introduce college football to new audiences, who may not have known much about the controversial championship formula or the nuances of the amateur version of the sport.

Spanish-speaking football fans, Cruz said, are not interested in statistics but often want to soak up rule explanations. His presentation, as a result, is a careful balance of information, excitement and what Gallegos describes as Latin spice (food is a frequent topic of discussion).

Gallegos doles out insider analysis from his firsthand knowledge of Patterson’s trademark defenses. Cruz said his partner expanded football comprehension for him, too.

Their repartee became second nature in a hurry, said John Denton ’85, director of major gifts for the TCU Frog Club. He does color commentary for TCU’s English-language radio broadcasts. “It takes a little while to develop chemistry on air, and it hasn’t taken them very long.”

Listen to an interview with Elvis Gallegos.