In 2016, TCU hosted its inaugural Indigenous Peoples Day Symposium, and the positive feedback that followed helped launch a dedicated, ongoing effort to acknowledge Native American people and communities. As part of this effort, the university has installed between Jarvis Hall and Dave C. Reed Hall a bronze plaque commemorating the Wichita and Affiliated Tribes who have called North Texas home for hundreds of years. 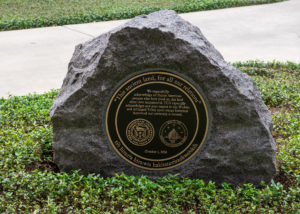 “The plaque is an important part of our efforts to engage Native American peoples and communities in respectful and mutually beneficial relationships,” said Scott Langston, Ph.D., instructor in religion and the initiator behind the plaque. “It reflects the university’s respect and regard for Native Americans, their cultures, experiences and knowledge.”

North Texas is widely recognized as part of these tribes’ historical homelands by both the tribes and non-Native scholars. According to Langston’s research, most of the Wichita and other Native American people lived in the area until 1841, when they were killed or driven away by a series of attacks on Indian villages.

Near that time, Pleasant Thorp, a veteran of the Army of the Republic of Texas, began acquiring the land that eventually became Hood County, settling on it around 1853 and founding Thorp Spring. His desire to establish a college there led to Addison and Randolph Clark’s founding of TCU’s (then Add-Ran College) initial location.

The United States later established the Brazos River Reservation in Young County and moved several tribes onto it as well as the Comanche Indian Reservation in Throckmorton County.

A dedication ceremony will occur at 10 a.m. Oct. 15 in front of Jarvis Hall, where the plaque is mounted in a large stone. The plaque features the sentiment, “This ancient land, for all our relations” written in both English and Wichita.