The fall semester marks the recognition of several prestigious university awards, including the Chancellor’s Award for Distinguished Achievement, Ferrari Award, Chancellor’s Staff Award, Diversity, Equity and Inclusion Award, Maryrose Short Award and Wassenich Award. Each will be featured in an upcoming video, but in the meantime we celebrate and congratulate these winners!

The Chancellor’s Award for Distinguished Achievement as a Creative Teacher and Scholar was awarded to Dan Williams, Ph.D., honors professor of humanities in the John V. Roach Honors College and the director of the TCU Press, in recognition of his work across the university as a teacher and scholar as well as community member. 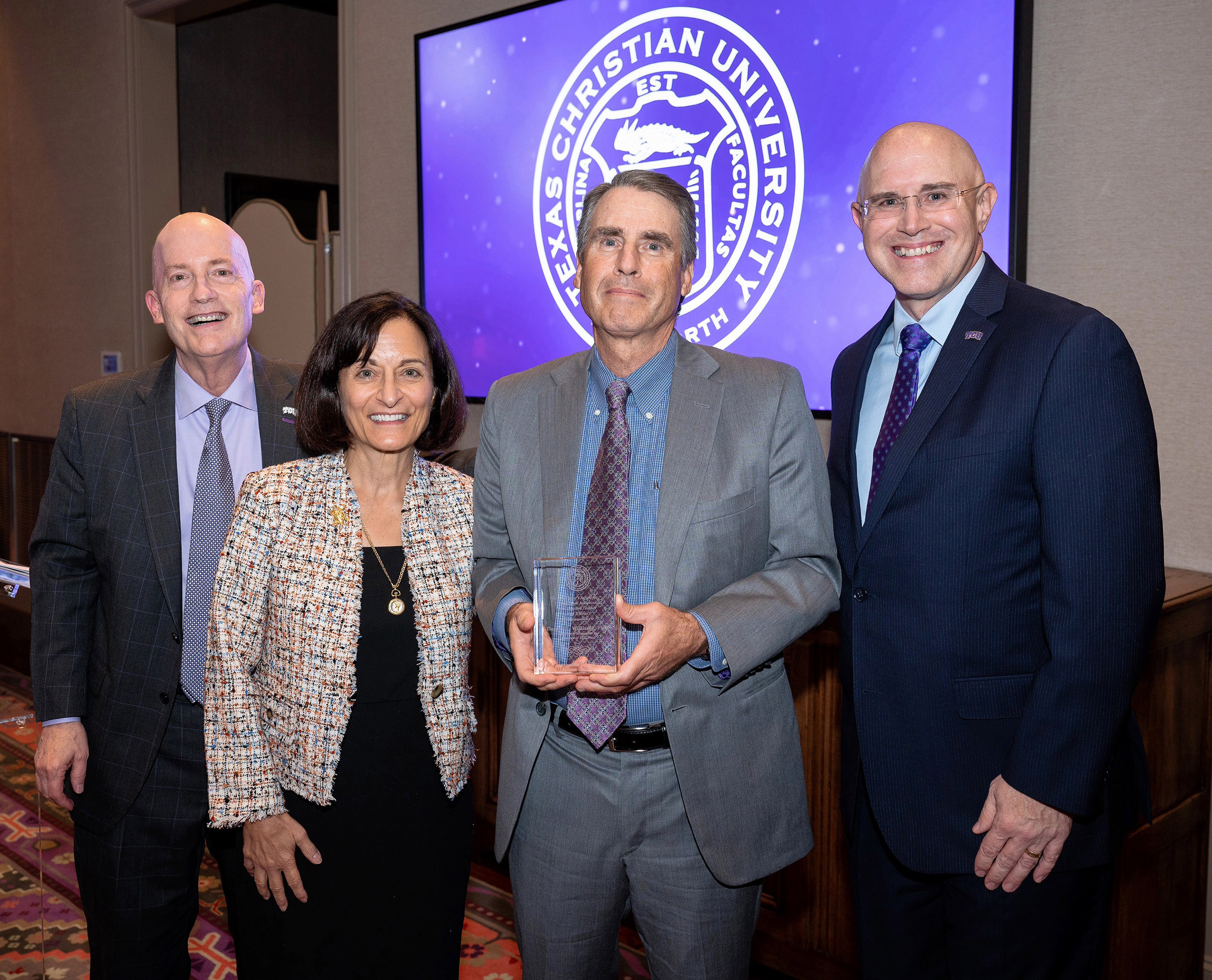 “It is rare to have a colleague who excelled in one category – either research or teaching – as much as Dr. Williams excels in both,” wrote his nominator. “More impressive is the selflessness of Dr. Williams’ work: In addition to publishing extensively and teaching courses that change students’ lives, Dr. Williams excels in the third rail of service and models for all faculty what it looks like to be a university citizen. Dan is an uncommon scholar and colleague whose work has played a major role in transforming TCU.”

The Chancellor’s Award for Distinguished Achievement as a Creative Teacher and Scholar recognizes extraordinary creative teaching and scholarship. Nominations are submitted to academic deans who provide recommendations to the chancellor. The winner receives $25,000.

Eric Wood, Ph.D., L.P.C., director of TCU’s Counseling & Mental Health Center, was awarded the Michael R. Ferrari Award for Distinguished University Service and Leadership in recognition of his outstanding leadership and contributions to mental health efforts at TCU and beyond, specifically during a demanding time following the COVID-19 pandemic. 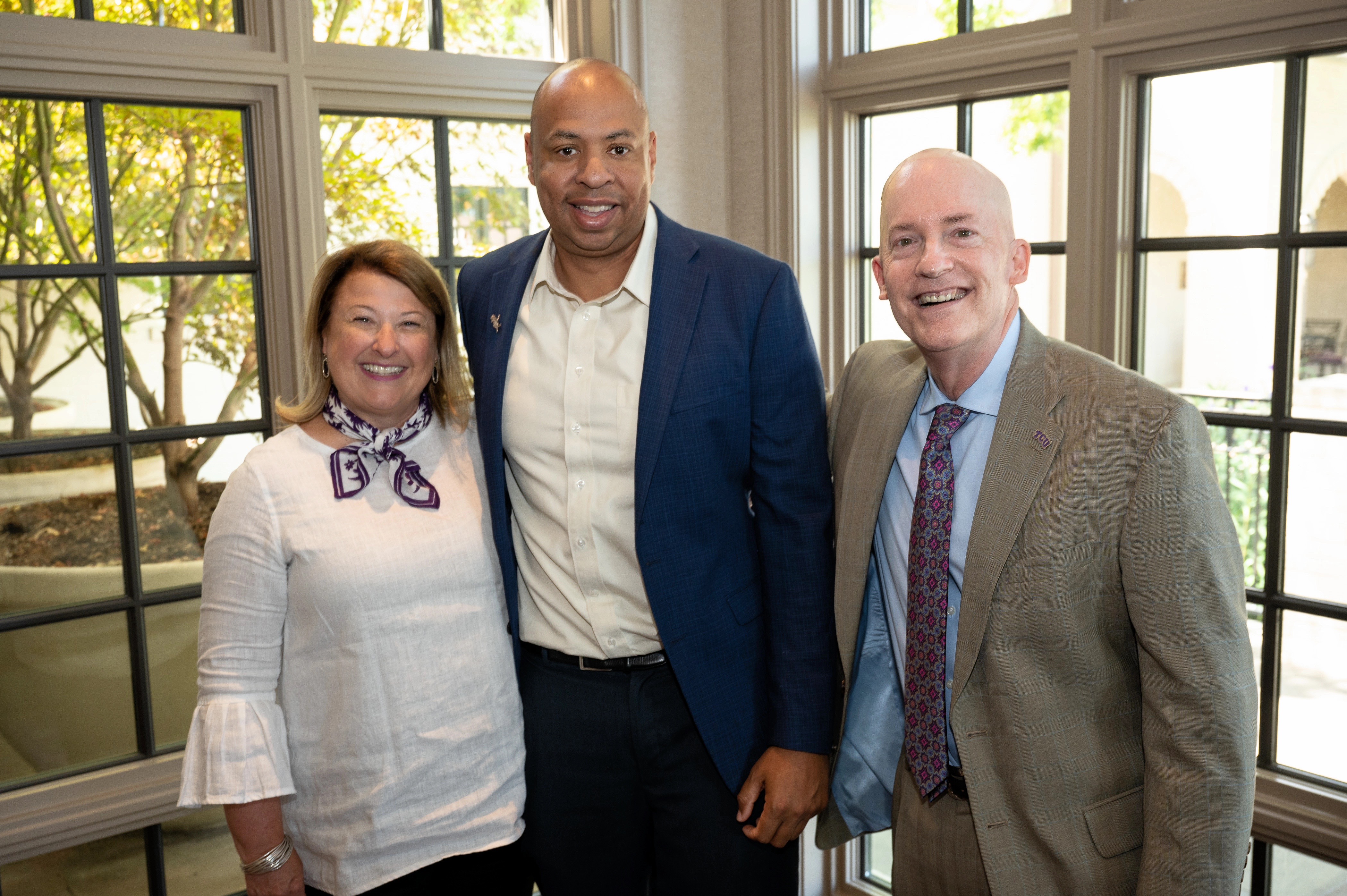 “It is clear to us that Dr. Wood embodies all of the characteristics of a Ferrari Award winner in his work and leadership at TCU.  He is an amazing, creative thinker and an optimist to the core,” said his nominators. “For someone who deals with student mental health every day, his work is plenty, but even more than solving the needs of our campus, Eric is changing the nature of college mental health nationally.”

The Ferrari Award was established by the TCU Board of Trustees to honor the former chancellor and recognize the extraordinary situational leadership accomplishments above job or position expectations of a faculty or staff member. The Ferrari Award carries with it a prize of $5,000.

The Chancellor’s Staff Award for Outstanding Service was awarded to Cynthia Montes, Ph.D., director of Student Support Services in the College of Education for, among other efforts, her outstanding leadership of TRIO, which supports first generation and lesser-income education students. 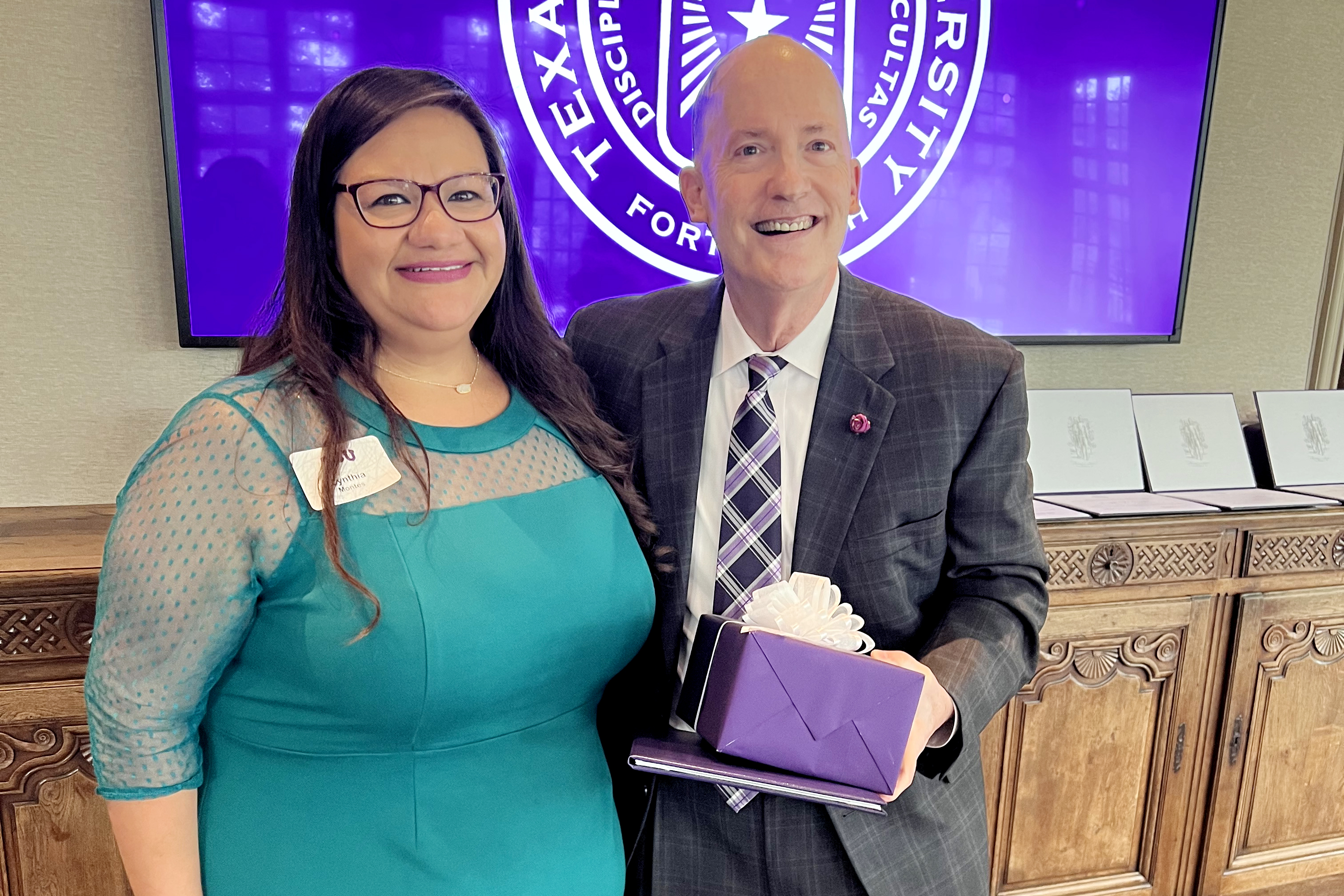 “Cynthia is a caring and compassionate servant leader at TCU. Cynthia has a positive and caring presence that helps our team to stay motivated and engaged, to work and center our campus's first-generation students,” said her nominator. “Cynthia relates with staff and students in a genuine and supportive way. She has an extraordinary ability to demonstrate empathy and builds meaningful working relationships with those around her.”

Created in 2003, the Chancellor’s Staff Award recognizes a staff member for exemplary service and contributions to the welfare of the campus community. The award includes a prize of $5,000. 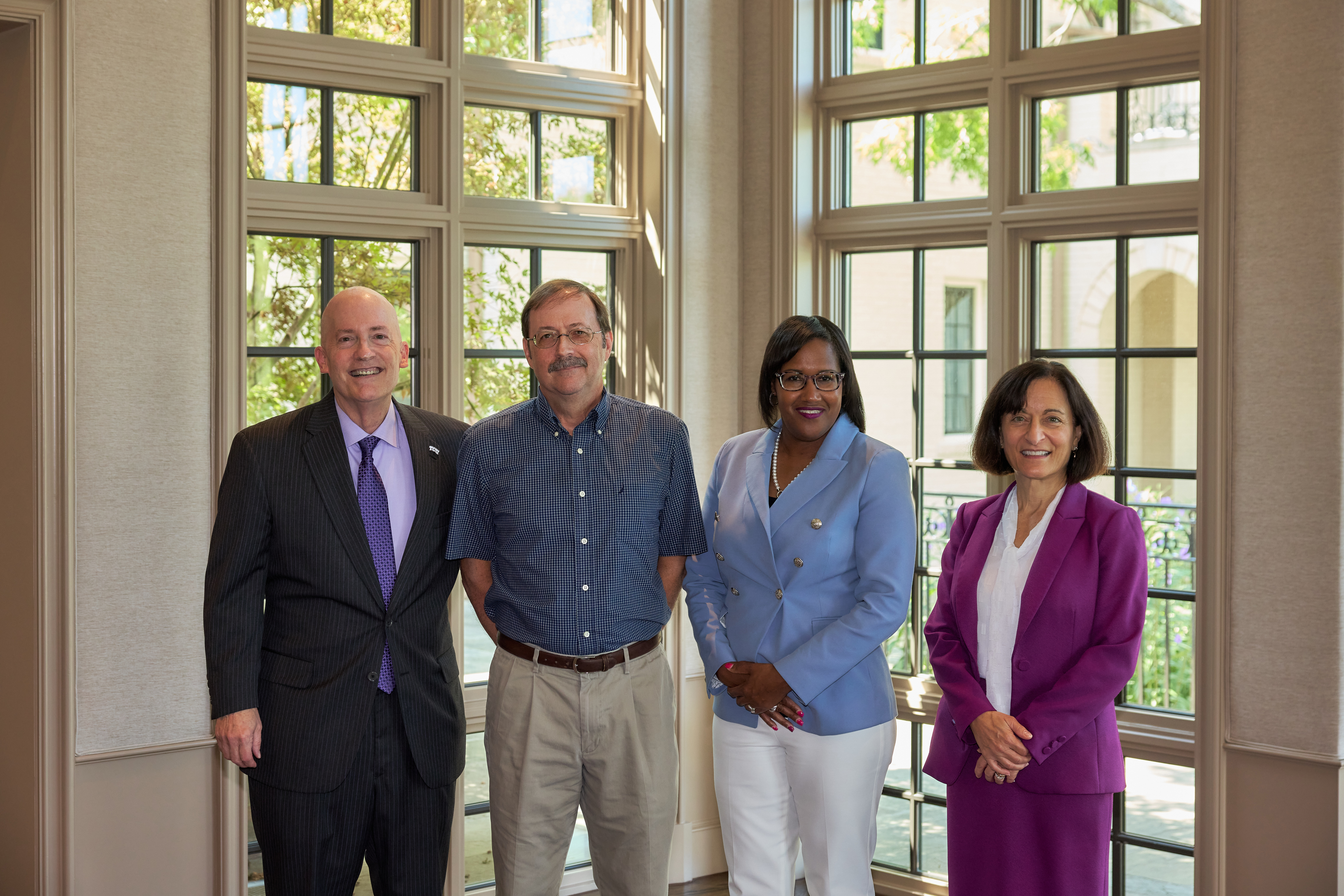 “Dr. Langston’s commitment to Native American and Indigenous People represents a near impossible task,” reads a letter of support. “As someone who is non-Native, Dr. Langston walks a fine line between ignorant but well-meaning outsider and yet another potential colonial exploiter – and he has impressively managed to walk this line with remarkable aplomb, never falling into either camp.”

The Diversity, Equity and Inclusion Award honors the important work of further transforming the TCU community into one that not only celebrates the university mission but also creates a world-class university built on a heritage of inclusion. Faculty, staff and students may nominate an individual. Finalists are selected by the DEI Award Committee, which provides recommendations to the chancellor. The winner receives $5,000.

The Maryrose Short Teaching Excellence Award was presented to Tatiana Argüello, assistant professor of Spanish and Hispanic studies, in recognition of her devotion to the interdisciplinary and global purview of foreign language instruction, including the creation and teaching of multiple courses. 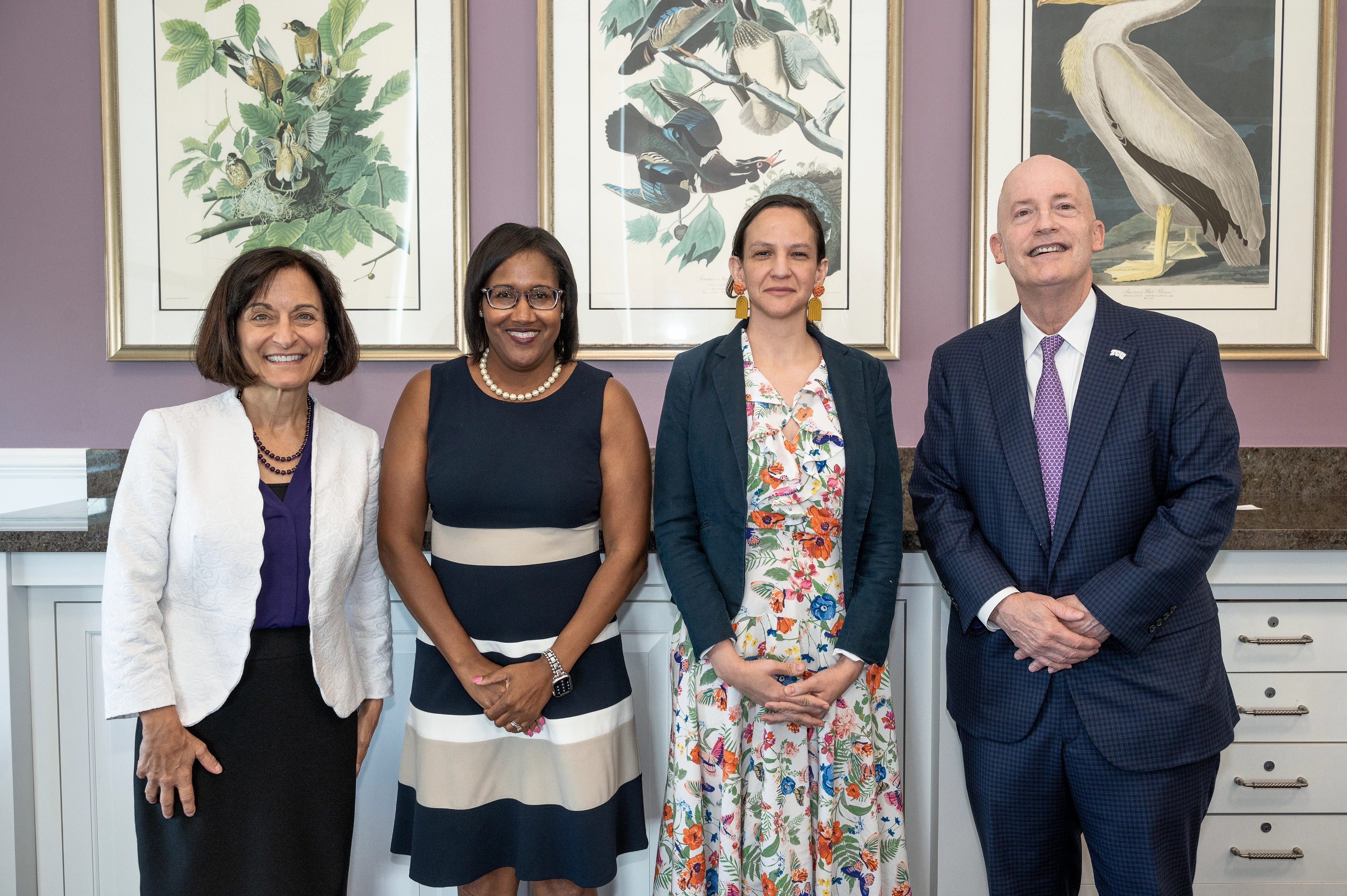 “As both teachers and scholars, we examine the culture, literature, cinema, history, politics, music, art history, economics and anthropology of the Spanish-speaking world,” wrote her nominator. “Tatiana exemplifies this inherently interdisciplinary and global purview in her scholarship and teaching.”

The Maryrose Short Teaching Excellence Award recognizes excellence in teaching and is specifically focused on exceptional untenured (tenure-track or non-tenure track), full-time faculty members with five years or less at TCU. Nominations from colleges and schools are submitted to academic deans who select the top three to submit to the provost for final selection. This award was established by Dan Short, Ph.D., former dean of the Neeley School of Business, in memory of his wife, Maryrose Short. The winner receives $6,000 with the stipulation that $1,000 be used for a professional development activity.

The Wassenich Award for Mentoring in the TCU Community was awarded to Jasmin Chung, assistant director of Student Success, from Student Affairs, for her efforts to challenge and mold students into future leaders. 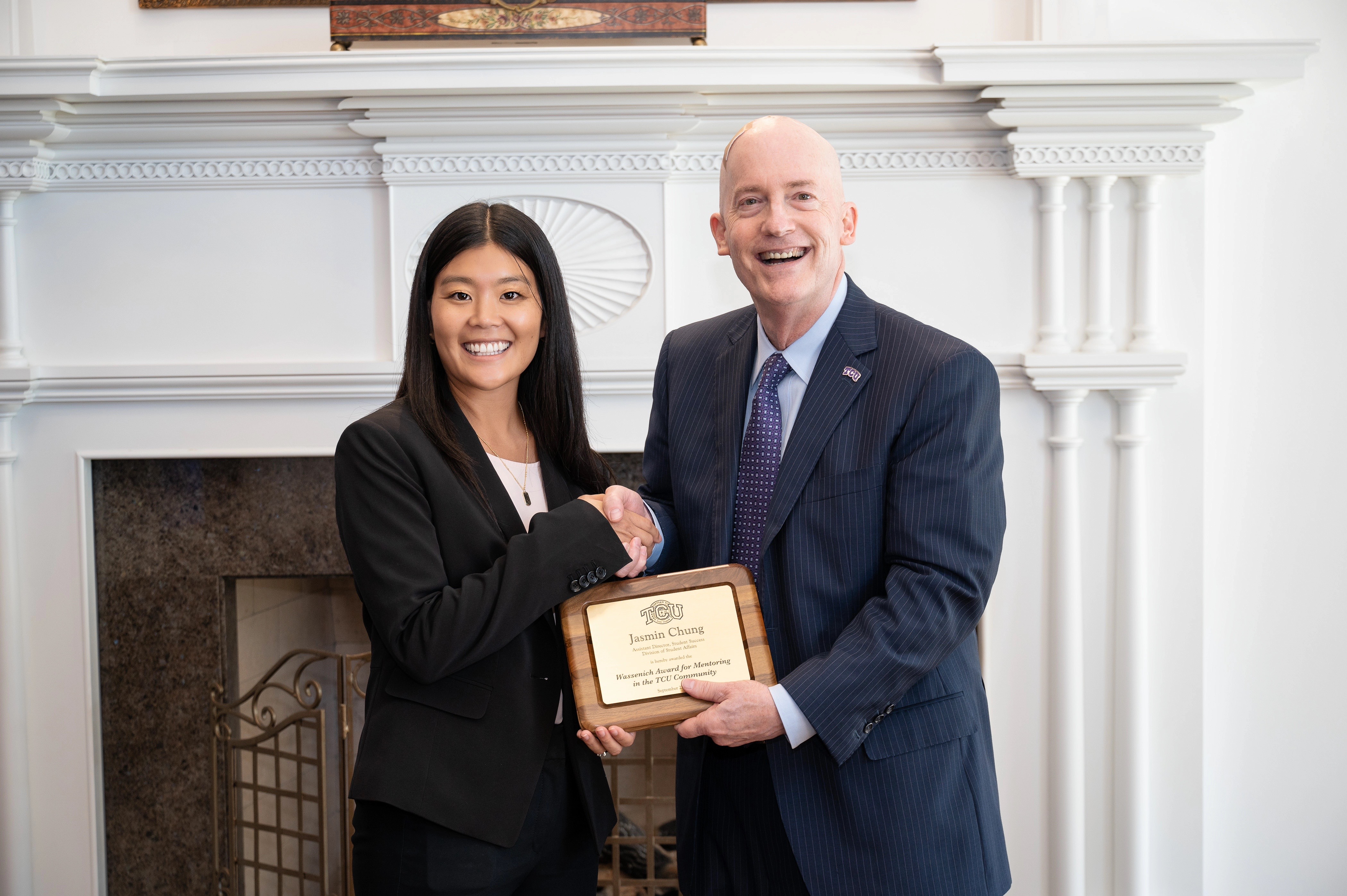 “Jasmin takes it upon herself to provide exceptional support and service to anyone she works with, whether that be new faculty or staff members, or student leaders,” said one of Chung’s mentees. “Jasmin always ensures that everyone she interacts with feels known, heard, valued and inspired, and provides them endless opportunities for growth.”

The Wassenich Award for Mentoring in the TCU Community was established by Mark and Linda Wassenich to celebrate this defining characteristic of TCU for many generations. Alumni and students may nominate faculty and staff members who serve as role models, advisors and guides to students, and the winner is chosen from a committee of faculty, staff and students. The winner receives $3,000.

For the full list of nominees, see the previous story on TCU News.