Photograph of Add-Ran College when its home was Thorp Spring; c. 1890 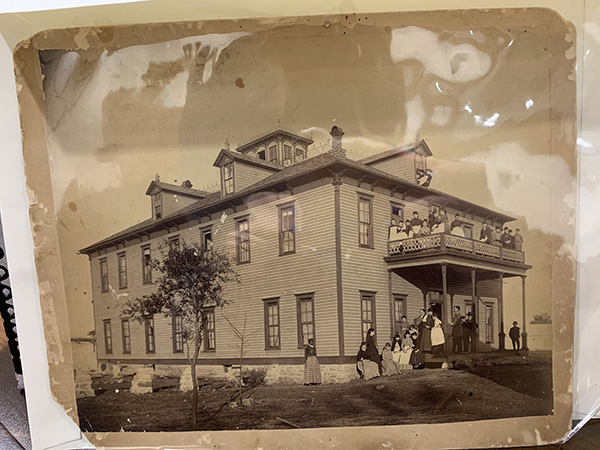 This photo appears on a scrapbook page of Mattie Cooper Harlin’s, which provides a list of teachers, including “Mr. Addison Clark, President” and “Mr. Randolph Clark, Vice-President," as well as a list of “girls of the boarding house” with 42 names. Note the lone Black woman off to the side and around the corner of the building. Who is she? Why is she not identified in the listing? What questions should we ask about her placement in what seems to have been a posed photograph? 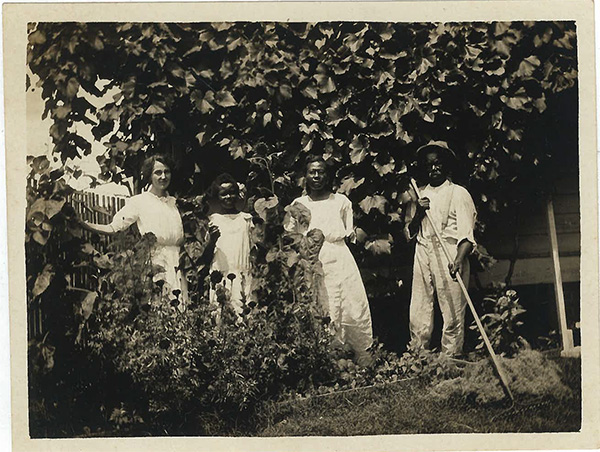 In contrast to the previous photo, in which a lone Black woman is segregated from a posed group of whites affiliated with Add-Ran, this image suggests comfortable familiarity between a TCU-affiliated white woman (probably in the Clark family) and Black associates. Written in pencil on the back of the photograph is this statement:  "Old Pack says he doesn't like to have a specimen made of him but he got in the picture just the same." Old Pack may be Charlie Thorp, and if so, the other two Black people in the photo could be Kate (Lee) Thorp and one of their offspring. While the date is not indicated, the image may be from the early 1900s.

Items below were collected/saved by Miss Olive McClintic while she was a TCU speech (elocution) teacher, beginning in 1901. Three items from this scrapbook are presented.

1) Two-page spread with program from an oratorical event on the left and an account of a student activity on the right; 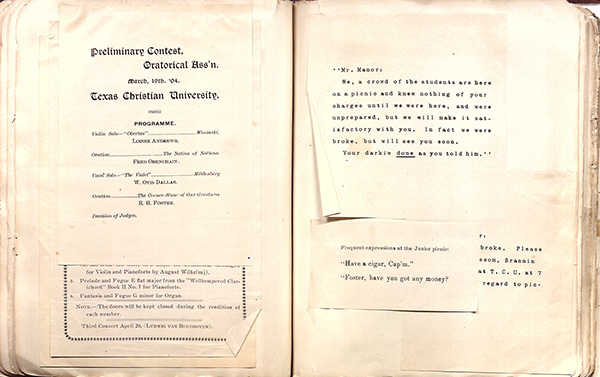 Located on page 50 of 75. The note listed on the top right corner of this page is written to a “Mr. Manor.” The scrapbook text seems to refer to a class prank between Juniors and Seniors of that year as described in a Skiff student newspaper article dated March 26, 1904, in an issue now available in the TCU Digital Repository. The Seniors sent a written message to Juniors with a demand from the purported owner of the land where the younger group was picnicking that they pay a fee for use of the place.  Noteworthy in both the article and the excerpt in the scrapbook is the white students’ (enforced?) enlistment of a “negro under the employ of the '04 class” in carrying out the plan of the Seniors against the Juniors. Also notable is the use of the term “darkie” within this text produced by TCU students of that time.

“Mr. Manor: We, a crowd of the students are here on a picnic and knew nothing of your charge until we were here, and were unprepared, but we will make it satisfactory with you. In fact we were broke, but will see you soon. Your darkie done as you told him.” 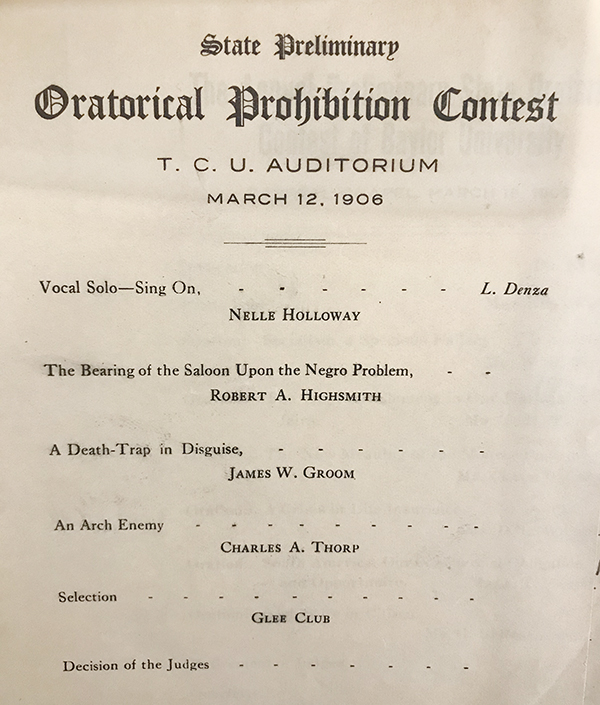 Note the program’s implicit linkage of “saloon” and “Negro problem.” 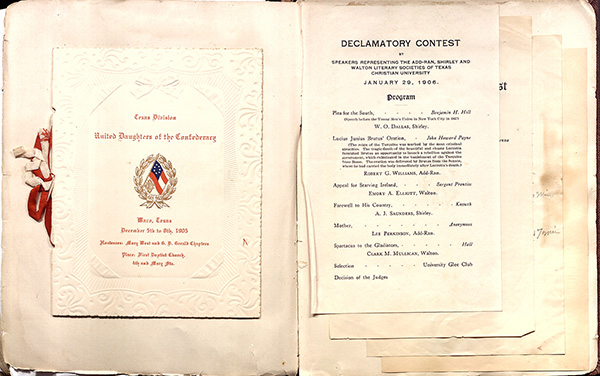 Program for a multi-day event sponsored by the Texas Division of the  United Daughters of the Confederacy, in Waco, TX, December 5-8, 1905. See pages from the program, which is saved in complete form in the McClintic scrapbook. 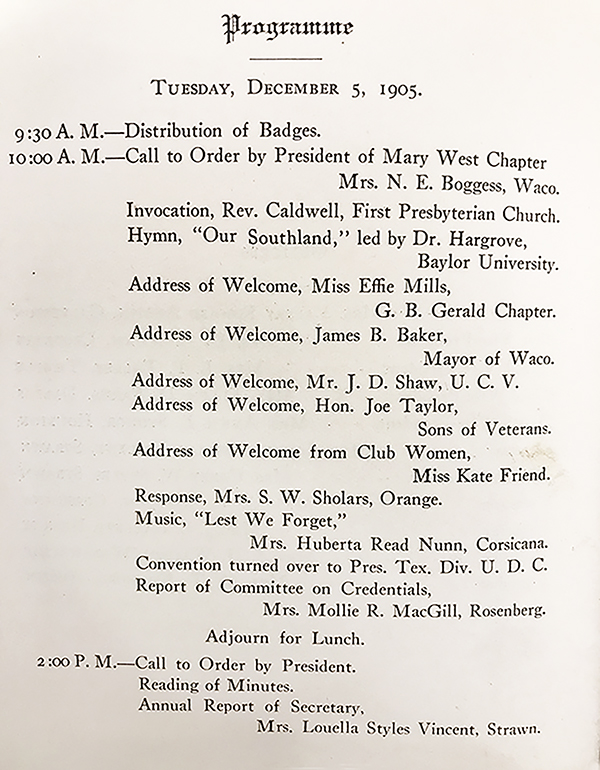 The program contains numerous titles and reference activities that underscore a positive memory of the Confederacy’s “lost cause.” See, for example, “Lest We Forget” on page 1 shown above and page 2’s reference to reverential care for Confederate soldiers’ graves and other memorial activities, shown below. 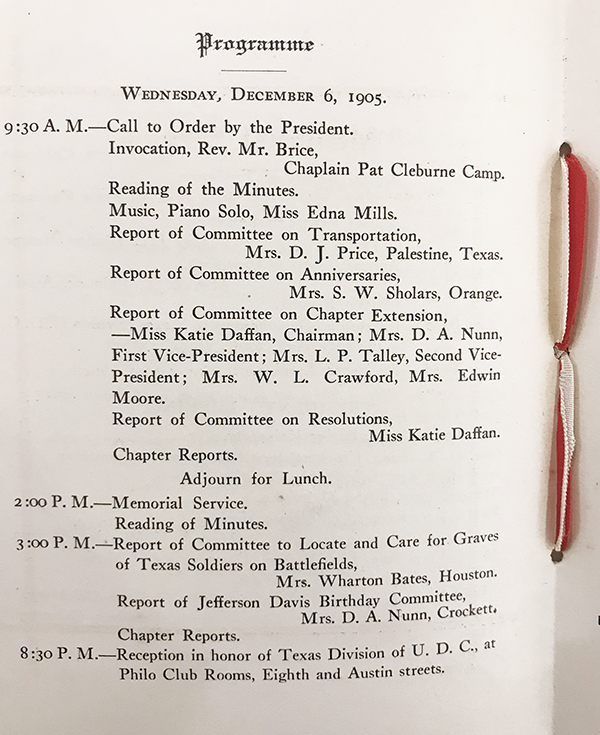 Details in the program also illustrate the persistence of racist stereotyping (e.g,. “My Old Black Mammie,” as seen here on the third interior page.) TCU faculty member “Miss McClintic” contributes to the program via an individual oratorical/speech performance for the “Literary Evening” event, with her performance coming just after a presentation whose title asserts the need of the UDC (United Daughters of the Confederacy) to operate “in perpetuity.” 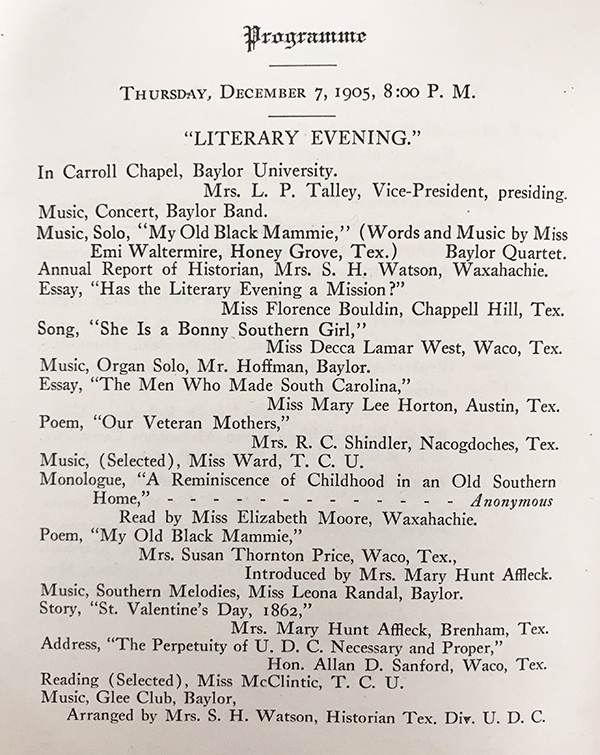 Clipping from a Student Scrapbook, c. 1919 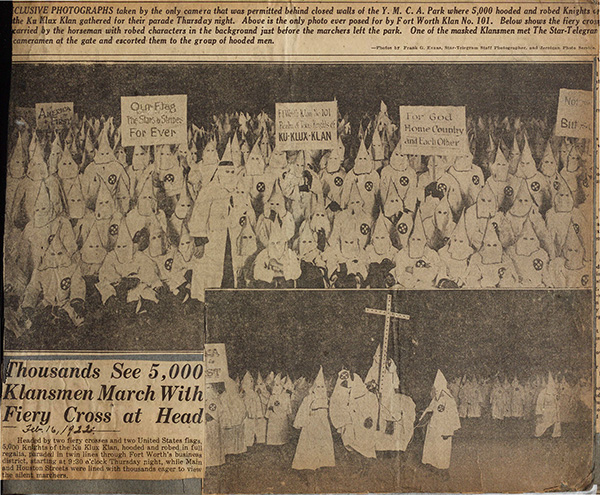 Located on page 126 of 138 of the scrapbook, these clippings from the Star Telegram show images of a KKK rally held in Fort Worth at the Y. M. C. A. Park. A hand notation marks the date as February 16, 1922. The student’s own assessment of the event is not recorded.