Conversations about race aren’t niceties—they’re as essential as oxygen.

Why keep these discussions going?

Imagine it’s a Tuesday evening. Sally and Johnny, having just completed their middle school studies for the evening excitedly make plans for dessert after dinner. They hatch a strategy: let's ask Mom first. They do this, and receive partial vindication, but not full validation when she responds, "I suppose I don't mind, but ask your father first." They approach their father, fully armed with the information that their other full-blooded, living parent has in part assented to their prayer. Unfortunately for Sally and Johnny, without as much as looking up from his laptop, the father utters the dreaded monosyllabic word, that destroyer of all dreams humane when he quietly says, "No."

Sally and Johnny plead their case. They wrack their little brains for evidence to strengthen their cause. As timing is everything, here in Sally and Johnny's case, the timing was for whatever reason, poor. Father was easily irritated — perhaps he too, is a Philadelphia Eagles fan — and suddenly, with voice rising in volume, stands up, slices his arm through the air and bellows, "End of discussion!"

We all have been in Sally and Johnny's shoes, where we have made a request or appeal to an authority only to be denied. Such denials are certainly disappointing. However, in this hypothetical, likely the true travesty is not in hearing the word "no," but rather how the denial was communicated. "End of discussion" signaled that no further input was welcome or necessary for resolution. The unilateral "end of discussion" is what can prove damaging, not the decision behind saying "no."

Within the universe of an institution of higher learning, there are many individuals with varying and different agendas on any given day of the week — many of which contain competing interests at times. When there are limited resources, an increased allocation for one department may mean less for another. Someone is going to be told "no" on a college or university campus at some point in time. Saying no is not the crime. Sometimes there are simply limits on what people in leadership positions can do. This is why continued discussion and dialogue is so very important. The idea that different points of view are aired, shared and compared with the existing status quo is the only way an organization can grow.

Making time for discussion is what any healthy organization needs in order to be in the best position to make good decisions. Discussions, when structured properly, can yield important pieces of information that can strengthen the collective perspective.

Considering different arguments before building a consensus is a proven method for vetting ideas. Often the chances of an entire body accepting a decision improve after a discussion — even if a significant (but not majority) number of individuals disagree with the decision — as opposed to a decision being handed down with no further outlet for expression (the toxic "End of discussion").

When time is of the essence, it isn’t prudent to extend a discussion and commenting session open for say, a period of twelve months; a decision must ultimately be made to ensure forward progress — but one that doesn’t prematurely curtail discussion.

One method of community discussion we wish to grow and develop even further at TCU is our monthly in-person roundtable series we call “Running the Race.”

To facilitate discussion, we’ve designed these campus spaces to meet our primary constituents— the students—right where they are. Assembling a small cadre of volunteers, our vision was to interrupt an otherwise tepid Friday afternoon while creating casual opportunities for substantive conversation about race. With the calamity at the Capitol earlier this year, there is no shortage of material to discuss.

Our belief and hope is that the TCU community will feel more comfortable sharing concepts of race and reconciliation in advance of our larger communal event, Reconciliation Day, happening April 21, 2021. 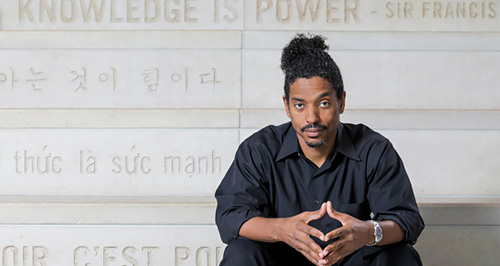 My name is Frederick Gooding, Jr. (AKA "Dr. G"). Besides being a rabid Philadelphia Eagles fan, I’m an associate professor of African American Studies at Texas Christian University in Fort Worth, Texas. I have the honor of serving as chair of TCU's inaugural Race & Reconciliation Initiative (RRI).

TCU’s Board of Trustees and the Office of the Chancellor have launched the RRI in order to study the university's historical connections to slavery, racism and the Confederacy. RRI will research and share information about the university's history, culminating in a first-year survey report to be released on Reconciliation Day on April 21, 2021. This thought leadership series here on our website is just one of our tools for sharing insights and information through the discovery process.

To demonstrate their commitment to the enterprise of truth telling, TCU has joined Universities Studying Slavery (USS), an international consortium of higher education institutions dedicated to coming to terms with a more complete and honest history.