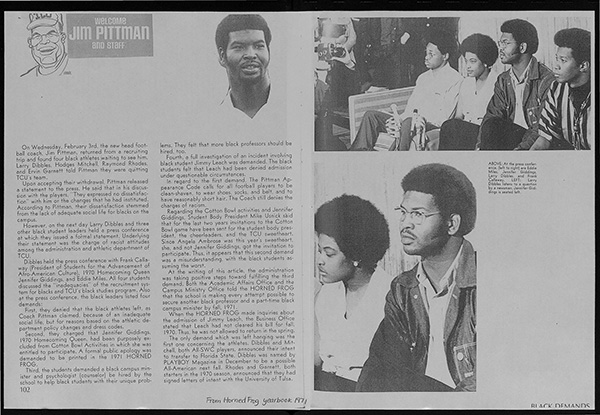 Text from the scan:

Upon accepting their withdrawal, Pittman released a statement to the press. He said that in his discussion with the players, "They expressed no dissatisfaction" with him or the changes that he had instituted. According to Pittman, their dissatisfaction stemmed from the lack of adequate social life for blacks on the campus.

However, on the next day Larry Dibbles and three other black student leaders held a press conference at which they issued a formal statement. Underlying their statement was the charge of racist attitudes among the administration and athletic department of TCU.

Dibbles held the press conference with Frank Callaway (President of Students for the Advancement of Afro-American Culture), 1970 Homecoming Queen Jennifer Giddings, and Eddie Miles. All four students discussed the "inadequacies" of the recruitment system for blacks and TCU's black studies program. Also at the press conference, the black leaders listed four demands:

First, they denied that the black athletes left, as Coach Pittman claimed, because of an inadequate social life, but for reasons based on the athletic department policy changes and dress codes.

Second, they charged that Jennifer Giddings, 1970 Homecoming Queen, had been purposely excluded from Cotton Bowl Activities in which she was entitled to participate. A formal public apology was demanded to be printed in the 1971 HORNED FROG.

Third, the students demanded a black campus minister and psychologist (counselor) be hired by the school to help black students with their unique problems. They felt that more black professors should be hired, too.

Fourth, a full investigation of an incident involving black student Jimmy Leach was demanded. The black students felt that Leach had been denied admission under questionable circumstances.

In regard to the first demand, The Pittman Appearance Code calls for all football players to be clean-shaven, to wear shoes, socks, and belt, and to have reasonably short hair. The Coach still denies the charges of racism.

Regarding the Cotton Bowl activities and Jennifer Giddings, Student Body President Mike Usnick said that for the last two years invitations to the Cotton Bowl game have been sent for the student body president, the cheerleaders, and the TCU sweetheart. Since Angela Ambrose was this year's sweetheart, she, and not Jennifer Giddings, got the invitation to participate. Thus, it appears that this second demand was a misunderstanding, with the black students assuming the worst.

At the writing of this article , the administration was taking positive steps toward fulfilling the third demand. Both the Academic Affairs Office and the Campus Ministry Office told the HORNED FROG that the school is making every attempt possible to secure another black professor and a part-time black campus minister by fall, 1971.

When the HORNED FROG made inquiries about the admission of Jimmy Leach, the Business Office stated that Leach had not cleared his bill for fall, 1970. Thus, he was not allowed to return in the spring.

The only demand which was left hanging was the first one concerning the athletes. Dibbles and Mitchell, both AII-SWC players, announced their intent to transfer to Florida State. Dibbles was named by PLAYBOY Magazine in December to be a possible All-American next fall. Rhodes and Garnett, both starters in the 1970 season, announced that they had signed letters of intent with the University of Tulsa.