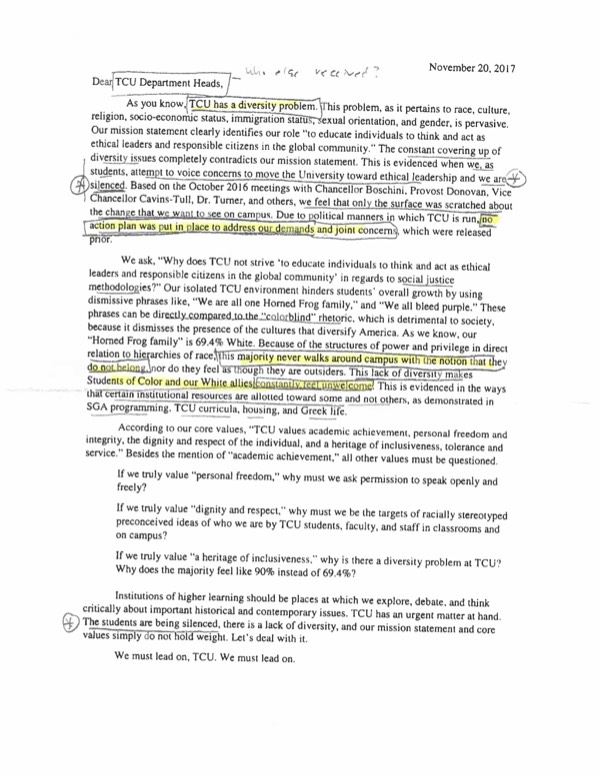 Text from the scan:

As you know, TCU has a diversity problem. This problem, as it pertains to race, culture, religion, socio-economic status, immigration status, sexual orientation, and gender, is pervasive. Our mission statement clearly identifies our role "to educate individuals to think and act as ethical leaders and responsible citizens in the global community." The constant covering up of diversity issues completely contradicts our mission statement. This is evidenced when we, as students, attempt to voice concerns to move the University toward ethical leadership and we are silenced. Based on the October 2016 meetings with Chancellor Boschini, Provost Donovan, Vice Chancellor Cavins-Tull, Dr. Turner, and others, we feel that only the surface was scratched about the change that we want to see on campus. Due to political manners in which TCU is run, no action plan was put in place to address our demands and joint concerns, which were released prior.

We ask, "Why does TCU not strive 'to educate individuals to think and act as ethical leaders and responsible citizens in the global community' in regards to social justice methodologies?" Our isolated TCU environment hinders students' overall growth by using dismissive phrases like, "We are all one Horned Frog family," and "We all bleed purple." These phrases can be directly compared to the "colorblind" rhetoric, which is detrimental to society, because it dismisses the presence of the cultures that diversify America. As we know, our "Horned Frog family" is 69.4% White. Because of the structures of power and privilege in direct relation to hierarchies of race, this majority never walks around campus with the notion that they do not belong, nor do they feel as though they are outsiders. This lack of diversity makes Students of Color and our White allies constantly feel unwelcome. This is evidenced in the ways that certain institutional resources are allotted toward some and not others, as demonstrated in SGA programming, TCU curricula, housing, and Greek life.

According to our core values, "TCU values academic achievement, personal freedom and integrity, the dignity and respect of the individual, and a heritage of inclusiveness, tolerance and service." Besides the mention of "academic achievement," all other values must be questioned.

If we truly value ''personal freedom," why must we ask permission to speak openly and freely?

If we truly value "dignity and respect," why must we be the targets of racially stereotyped preconceived ideas of who we are by TCU students, faculty, and staff in classrooms and on campus?

If we truly value "a heritage of inclusiveness," why is there a diversity problem at TCU? Why does the majority feel like 90% instead of 69.4%?

Institutions of higher learning should be places at which we explore, debate, and think critically about important historical and contemporary issues. TCU has an urgent matter at hand. The students are being silenced, there is a lack of diversity, and our mission statement and core values simply do not hold weight. Let's deal with it.